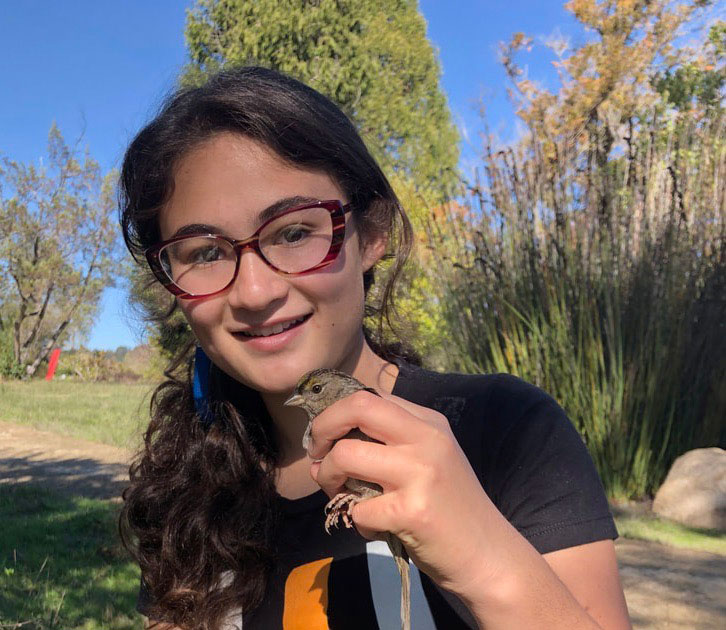 In late fall, weary flocks of Golden-crowned sparrows start to arrive at their wintering grounds across California. One location where the sparrows settle down for the cold months is the University of Santa Cruz Arboretum. This 135-acre garden is brimming with exotic plants, as well as California flora, from Australian cotton-candy-coned Woolly Banksia to native sticky-leaved monkeyflowers.

Professor Bruce Lyon and his graduate students have been banding Golden-crowned Sparrows at the arboretum for over 18 years. Through banding, they attribute behavior and DNA to individuals. The Lyon Lab has published many studies on sparrow social behavior in conjunction with former graduate students Dai Shizuka, Theadora Block, and Alexis Chaine.

Though Golden-crowned Sparrows are territorial on breeding grounds, they become social on the wintering grounds, recognizing and foraging with flockmates from the previous winter, and even meeting new sparrows. Flockmates aren’t defined by kin or nearby breeding sites; they meet and hang out entirely on the wintering grounds, as far as we know. Sometimes unfamiliar sparrows form temporary flocks. This creates a fission-fusion dynamic that the Lyon Lab has studied since the foundation of the Golden-crowned Sparrow Project.

Applying for an Internship 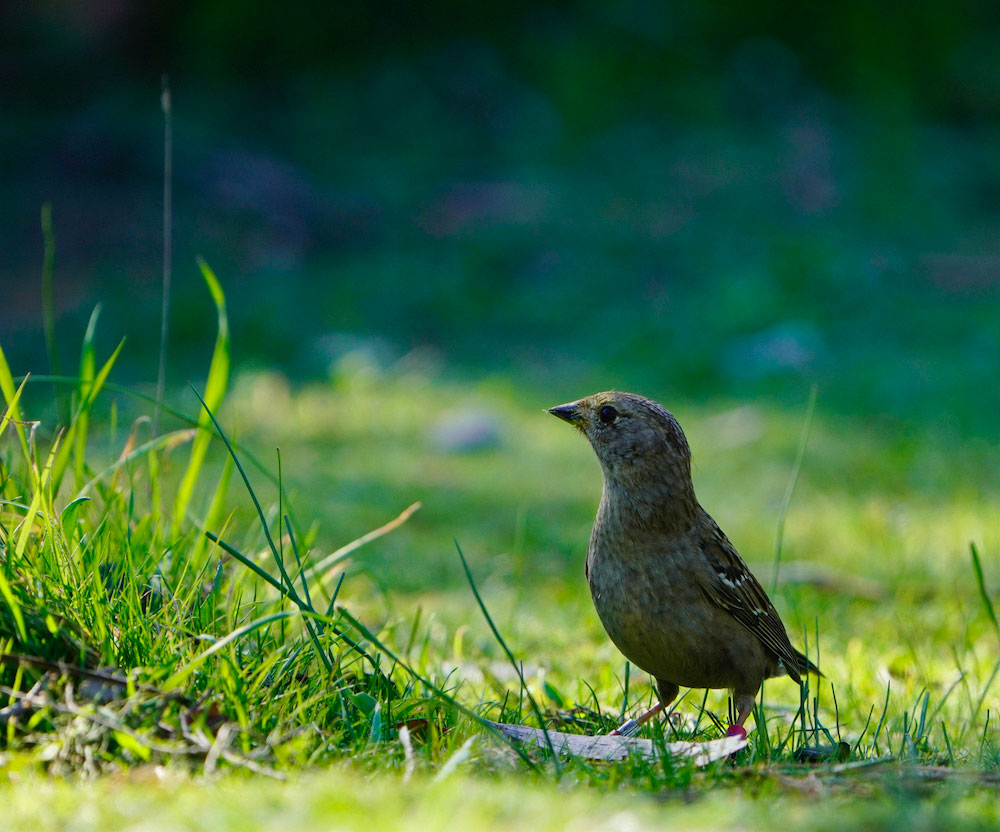 After emailing over a dozen professors for internship opportunities, I got a definite response from the UCSC Lyon Lab last fall. When prompted to complete an application, I sent a reference in the birding community and a CV, as well as a cover letter highlighting how my interests and birding experience aligned with the Golden-crowned Sparrow Project’s objectives. I was lucky enough to be selected.

As I looked at the goals and requirements for the internship, I was a bit intimidated. I had lots of classes in the fall, and the project required data entry and proofing on top of five hours a week of surveying at the arboretum. I decided that sacrificing some free time was worth gaining experience in the field.

There were three training sessions before interns could go out on solo surveys. On my first session, I was handed survey sheets and a clipboard with a coordinate map of the arboretum taped to the back of it. Angela Brierly, the Field Project Manager who trained new interns, found the first flock of sparrows within a few minutes. They hopped and darted around on the grass, pecking at invisible seeds. I squinted through the binoculars, trying to discern the colors of their leg bands. They flew or jumped right at the moment I thought I registered one of the colors.

Eventually, I became fluent in holding binoculars and clipboard at the same time while reading and remembering the band colors. I learned to discern auburn-striped juvenile White-crowned Sparrows from dull-crowned Golden-crowns in low light. I watched the sparrows stuff their faces with banksia nectar and hop around grevillea bushes.

Each Golden-crowned has different-sized black stripes and yellow crowns or “badges.” This interspecies variation of crowns is another focal point of study by the Lyon Lab. In groups of unfamiliar sparrows, dominance is determined by badge size: a bird with a larger yellow badge would chase away a smaller badged bird from a food source. However, in groups of familiar individuals, crown size does not determine dominance.

Surveying is important because it adds data to a social network program that maps out the sparrow flocks. Besides surveying flocks, I noted singing and “tethering” behavior. Professor Lyon and his research team hypothesized that singing occurs as a sort of greeting or bonding ritual on the wintering grounds. The sparrows sing much more often in the beginning of the season when new birds are arriving. Tethering is a behavior where two sparrows seem to be best friends, foraging together, which also seems to coincide with one singing and alarm chipping to the other. 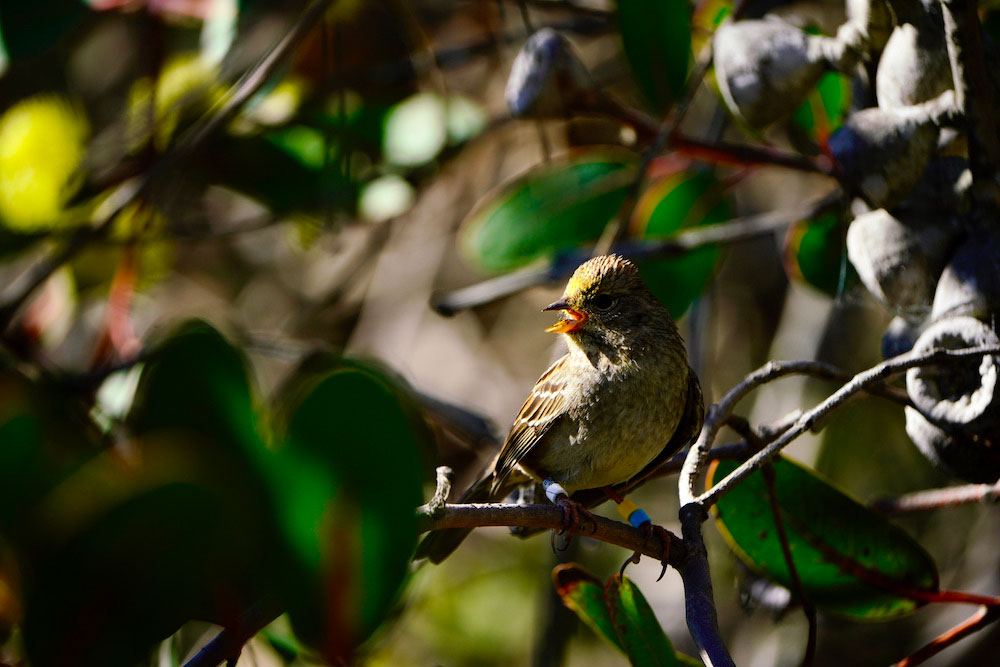 After a month of surveying, I was offered the opportunity to help band sparrows. Disarmed traps are baited with seed and usually set out a day before banding, letting the sparrows get used the location. Before setting the traps the next morning, we set up a banding station on a table or bench. Banding birds is a huge responsibility; birds are delicate, and whether you remember to check a trap could mean life or death. So, we are extremely careful, writing down whether the traps are armed, disarmed, or checked. On a tree next to the banding station, we hang a clothesline with clips. When ready to check the traps, we bring along small cloth bags.

Usually, a more experienced intern removes the bird from the trap and places it into the bag. The bag must be inside out so that the sparrows won’t catch their claws in the frayed fabric. We text the trap number, bag number, and, if applicable, band colors and numbers to Angela. If a banded bird is caught, we check a list of birds we’ve already caught. If it is on the list and doesn’t need another measurement or sample, we release it, but if it is missing information or is not on the list, we take it to the banding station and hang the bag on the clothesline.

We take the birds out of the bags in chronological order in order to minimize their time in the bags. An intern notes the measurements that Angela takes in an app, such as weight, wing chord length, tarsus length, and culmen length. Angela also checks for fat deposits and pin feathers. She takes the two outer tail feathers and collects blood samples by pricking a vein in the bird’s wing (homologous to the one we get our blood drawn from). This blood is used for hormone studies and DNA samples. Afterward, a Q-tip is pressed to the wing to stop the bleeding. Then we photograph the bird’s crown next to a ruler so those in the lab can find the pixel length for the studies. Then, Angela transfers the bird into a bag so an intern can practice releasing it.

A Sparrow in the Hand

I reached into the cloth bag, forming a “V” with my index and middle finger. Finding the sparrow’s neck, I gently closed it within the V and held the rest of the bird’s body in my palm. I slowly drew it out of the bag, careful not to bend its rigid tail feathers. I looked into its shining brown eyes, rimmed with delicate white bristles. It had been raised in a nest in the north, and had seen the gaping mouths of its siblings and herds of caribou traversing the freezing landscape. As it migrated south, it had viewed the patchwork of taiga and deciduous forests passing below its small wings. A few mustard yellow feathers running past the bold black forehead stripes formed an eyebrow-like marking. This bird had experienced so much. The golden badge on the crown brightly contrasted the black, marking its high status among unfamiliars. It wriggled in my hand. I looked at its grass-smeared beak, then relinquished my grip. The wild creature’s wingtips brushed my fingers as it fled into the bush. “Goodbye!” I whispered to it, hoping it would return to the arboretum next year.

Throughout the internship, I’ve learned so much about ornithology—how to survey birds, how to band birds, and the sheer amount of information that scientists can gather from just one population. I’ve become much more attuned to bird behavior as well. If you are a fellow teen hoping to study ornithology, I suggest reaching out to professors through their email, which is usually posted on the college website. The worst that could happen is that they won’t respond. Be prepared to sacrifice some free time, and don’t be afraid to ask questions. If there are other new interns, they probably have similar questions. By interning you will contribute scientific knowledge and gain valuable skills you can apply to your own bird research in the future.