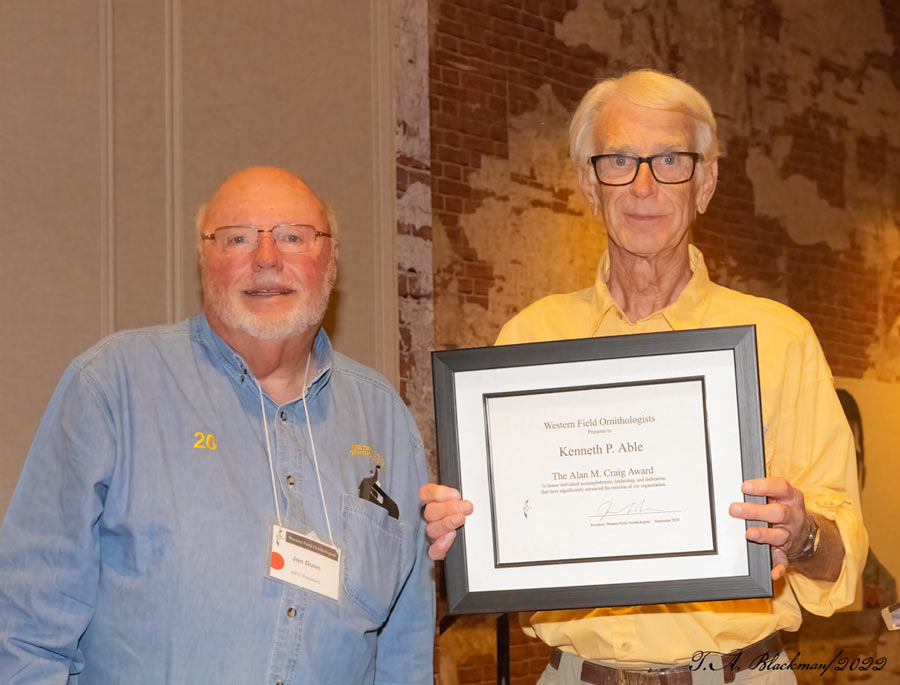 The Alan M. Craig Award, established in 1987, is given on an irregular basis for “exceptional service, leadership, and dedication to WFO over a sustained period of time.” The award is named in honor of Alan Craig, a founding member of WFO and a founding editor of Western Birds (formerly California Birds), which he edited for 14 years.

On September 10, 2022, at the 46th Annual Conference in Reno, Nevada, Western Field Ornithologists presented the Alan M. Craig Award to Kenneth P. Able for his extraordinary service in developing the WFO publications program. During his tenure of nearly a decade as an active WFO Board member, Ken served as special publications editor and as a member of the Publications Committee, later becoming committee co-chair, and finally sole chair of the committee. He gave WFO his all, devoting years and untold hours to the organization and the organization’s mission. Ken kept the WFO Publications Committee and the Board vibrant. He used his past experiences, skills, sense of humor, and scholarship to further field ornithology in the West.

Publications such as these are complex projects that include managing the mechanics of publication; working with authors and in some cases multiple editors; managing time lines; assuring accuracy and critical review of scholarship; and coordinating each step of the publishing process up to book sales and distribution. Ken’s colleagues on the Publications Committee praise his dedication, honesty, and generosity of spirit. As one colleague, Catherine (Cat) Waters, said: “He respected his committee’s individuality, talents, and opinions. No one who worked with him was treated as anything less than a partner. You could absolutely, positively trust, have faith in, and learn from working with him.”