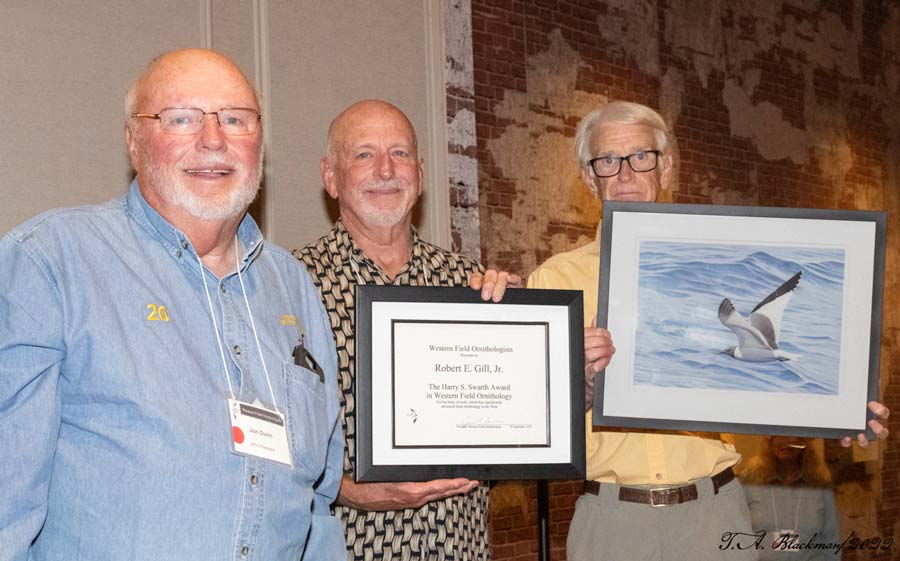 Western Field Ornithologists presented the Harry S. Swarth Award to Robert E. Gill Jr. on September 10, 2022, at the 46th Annual Conference in Reno, Nevada. WFO established the Harry S. Swarth Award in 2011. The award honors a body of work that significantly advances field ornithology in the West. The award’s name commemorates Harry S. Swarth (1878–1935), a giant of field ornithology who worked in much of western North America during the late 19th and early 20th centuries and who contributed more than 200 publications to the scientific literature.

Bob Gill enjoys an international reputation based upon more than four decades of outstanding research on the ecology, population biology, behavior, physiology, and migration of Alaskan-breeding waterbirds, primarily shorebirds. This work has resulted in more than 100 papers published in leading international ornithological and general biological journals. In addition, he has authored or co-authored a remarkable seven species accounts in Birds of North America. He was co-editor of Trends and Traditions: Avifaunal Change in Western North America (Studies of Western Birds, No. 3), in which he also co-authored two papers. He has also authored or co-authored 13 technical reports on the status, population biology, and conservation of Alaskan shorebirds and other montane nesting species.

Following Bob’s undergraduate and graduate education at San Jose State University, he was hired to lead the Shorebird Research Project for the USFWS in Alaska, part of the Outer Continental Shelf Environment Assessment Program. His work in Alaska has involved numerous species and a wide variety of topics, but his research on the migration of shorebirds has been arguably the most important. His work on the extraordinary migration of Bar-tailed Godwits has brought international attention, including in the popular press, such as a recent article in the New York Times (September 20, 2022). He documented the extraordinary amount of fat deposited by the godwits (55 percent of fresh body mass, the highest fat loads ever recorded in birds) and the concomitant shrinkage of vital organs (gizzard, liver, kidneys, and guts) prior to migration, reconstituted later upon arrival on the wintering grounds. Initially making the case based from sightings of marked birds and the timing and distribution of baueri godwits in the Pacific region, he used satellite tracking to demonstrate beyond any question that they were, indeed, performing the longest nonstop migratory flight of any bird, 11,000 km from Alaska to New Zealand.

Bob’s Bar-tailed Godwit studies have garnered much attention, but he has done important work on the ecology and conservation of many species, including Dunlin, Bristle-thighed Curlew, Rock Sandpiper, Red Knot, and Surfbird. Bob has collaborated with scientists worldwide on studies of migration ecology. Conference attendees heard Bob present the work of himself and his colleagues on the challenges presented by climate change for trans-Pacific migrants, a study combining knowledge of migratory ecology with climate modelling.

Western Field Ornithologists congratulates Bob Gill, recipient of the Harry S. Swarth Award, for his distinguished body of work on the field ornithology of birds.